Councillor walks out of meeting in protest over opening karakia

A Ruapehu District councillor has refused to stay in the room for a 12-second karakia to open a council meeting. 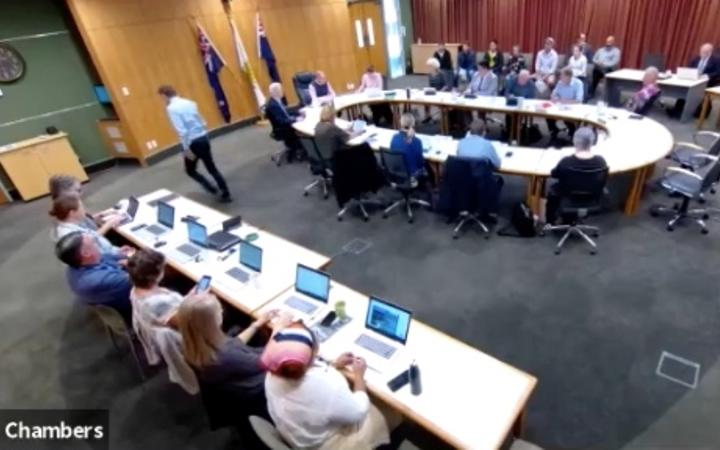 Taumarunui councillor Adie Doyle stopped an opening of a full council meeting immediately after Mayor Don Cameron asked councillor Elijah Pue to open the meeting, as he has done regularly in recent months.

Doyle said he was uncomfortable with opening a public meeting with any formal system of belief, whether it was “a karakia, a Hail Mary or an Our Father”.

While he said he respected everybody’s right to a belief system, he asked the Mayor to respect his right not to be present for the karakia and excused himself from the room.

Pue proceeded with the karakia he has been giving for several months. The 12-second karakia, Tēnei Te Pō, was written by Ruapehu iwi leader Che Wilson.

Doyle returned to the council chamber after the karakia was recited. It’s understood he raised the matter formally with the Mayor after the meeting.

In a text to Awa FM, Doyle said: “Karakia was introduced without consultation or the consent of elected members.”

“Whilst I respect the right to exercise a system of belief, there should be a corresponding respect for people who choose not to exercise that right. In short, I would prefer that politics and religion did not mix.”

Pue said he expected the issue would be up for discussion at the council’s next meeting.

“I have been doing a karakia recently,” he said. “There have been councillors who have expressed concern about that.

“In order for a karakia to be a standing item on the agenda I understand there would be a change to standing orders for that to occur but before that you would want some sort of consensus from the incumbent councillors to make sure that there was a level of comfort around that.”

Pue says using karakia to open meetings would contribute to the council being a good Treaty partner.

“I support a karakia at the start of our hui.

“All of that paints a really good picture that we are doing good for our treaty partnership.”

Previous: Whanganui health providers grapple with Covid-19 vaccine hesitancy Next: RMA and water reforms: 'Crunch time' for Māori grappling with flood of reforms Back to all news