A new community-led strategy for suicide prevention says many people are living in an extreme state of stress, the mental health services sector “feels overwhelmed” and health practitioners are not coping with growing need. 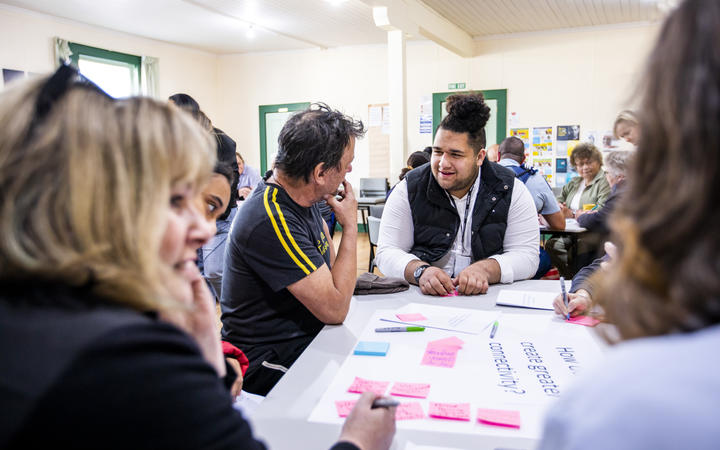 A community workshop in Taihape contributes to the design of the Growing Collective Wellbeing suicide prevention strategy. Photo: Supplied

The strategic approach released this week by Healthy Families Whanganui, Rangitīkei and Ruapehu says youth suicide and serious self-harm are increasing, men are dying from suicide at nearly three times the rate of women, and suicide rates among Māori continue to be disproportionately high.

The initiative is calling for radical change across the health system. It wants a coalition of health providers and the community to focus on reducing the “unacceptable” rate of suicide and bring lasting change to wellbeing in the region.

“As it stands, suicide rates in the Whanganui District are too high,” the report says.

“The wellbeing of citizens and their whānau/families in the District is not where we want it to be. Through the strategy we are seeking to reduce suicide numbers in our region, the rate of suicide, the level of suicidal behaviour and the level of serious intentional self-harm.”

Annual provisional suicide statistics for deaths reported to the coroner in the year to 2020 show the suicide rate for men in 2019-2020 was 19.03, nearly three times that of women at 7.18. However, attempted suicide rates for women were significantly higher than attempts by men. 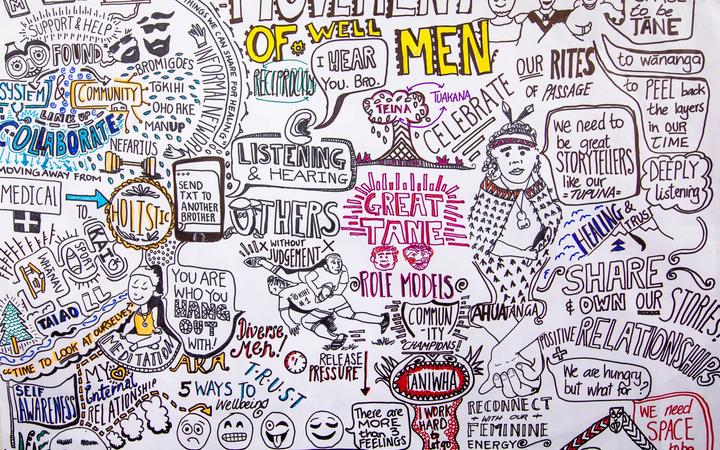 A brainstorming board from a men’s wellness breakfast as part of the drive to develop a new suicide prevention approach. Photo: Supplied

According to statistics from Whanganui Regional Health Network, Māori are most prevalent in serious self-harm hospitalisation rates for youth aged 10-24, as they are in attempted suicides and suicides, the report says.

Self-harm has been rising since 2018 amongst those aged 15-19, with 42 incidents in 2020. Females are most prevalent, as they are in attempted suicides. Between the ages of 10-14, three children in the Whanganui District were hospitalised for serious self-harm in 2020 – before that, there were no cases reported.

The strategy, Growing Collective Wellbeing, notes there appears to be a correlation between social and economic deprivation and suicide, with rates among lower socio-economic groups significantly higher and growing, and many people are trying to cope on their own with stressors such as intergenerational trauma, financial burden or violence.

Marguerite McGuckin, Lead Systems Innovator for Healthy Families Whanganui Rangitīkei Ruapehu, said the three-year approach has been guided by local communities, partners, advisors and other stakeholders who are willing to work together to achieve change.

“We want sustainability and system change – we need to have the shift from intervention to prevention,” McGuckin said

“We want transformation, going from an isolated health response to collective action with deep and durable impact. It’s those sorts of shifts that we need so that it will become sustainable for our communities.

“I think we’re all hoping for solutions that will happen in five minutes, and that’s not doable if we want sustainability. With a whole-of-community and whole-of-systems approach we believe that it will be sustainable as opposed to a bandaid.”

“It’s a different approach, the first approach of its kind amongst any of the DHBs. We’re coming at it with a preventative and a whole-of-systems, whole-of-community approach,” McGuckin said. “We have to thank the chief executive and Whanganui District Health Board for being courageous and bold enough to actually put this out to the community to design.

“On top of that, to have all of the community and our partners and stakeholders knocking on our doors wanting to be part of this approach is amazing. They’ve been a part of that journey for the last two years.

“We all have a part to play in keeping ourselves or our mates or our communities on the right end of that wellbeing spectrum instead of at suicide and suicidal behaviour. Our people need to know that it’s OK to be well but vulnerable – it’s about getting them back to being well again.

Where to get help:

Need to Talk? Free call or text 1737 any time to speak to a trained counsellor, for any reason.

If it is an emergency and you feel like you or someone else is at risk, call 111.

Previous: 'Same old colonial approach' – Iwi leader on collective plans Next: Covid-19 vaccines available for all in Whanganui communities Back to all news